A viral leads a brand to change its name

Some virals are planned. While many happen.
Ofcourse planning it is what we teach and share,
heres an interesting example about how brands could use it, once it happens. 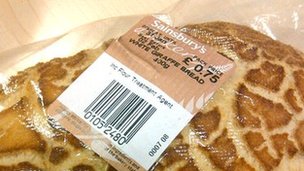 The newly-branded giraffe bread went on sale on Tuesday
Sainsbury's is renaming its tiger bread after a letter a three-year-old girl wrote to the company, saying the bread looked more like a giraffe, went viral.
In May 2011, Lily Robinson wrote to the supermarket, suggesting that the bread should be called giraffe bread.
She received a letter back saying that renaming it was "a brilliant idea".
Her mother posted the letters on her blog and after it again became a topic of conversation on social media sites last week, the bread has been renamed.
Lily's letter said: "Why is tiger bread called tiger bread? It should be called giraffe bread. Love from Lily Robinson age 3 and 1/2".
Chris King from the Sainsbury's customer services team wrote back: "I think renaming tiger bread giraffe bread is a brilliant idea - it looks much more like the blotches on a giraffe than the stripes on a tiger, doesn't it?"
But he went on to explain how it had got its name: "It is called tiger bread because the first baker who made it a looong time ago thought it looked stripey like a tiger. Maybe they were a bit silly."
He included a £3 gift card, and signed the letter "Chris King (age 27 & 1/3)".
The exchange began trending on Twitter but then died down, before it re-emerged on social networks last week. 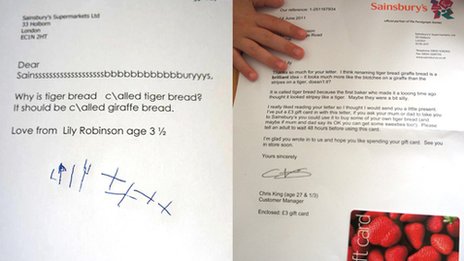 Sainsbury's has now given in to popular demand.
"In response to overwhelming customer feedback that our tiger bread has more resemblance to a giraffe, from today we will be changing our tiger bread to giraffe bread and seeing how that goes," the supermarket said.
Tiger bread is typically a bloomer loaf with a pattern baked into the top. Rice paste is brushed on to the surface before baking, forming the pattern as it dries and cracks while it bakes.
Sainsbury's said that Chris King had now left the company and had returned to university to study to be a primary school teacher.