Secrets to a great PR campaign

In today's social world marketers are increasingly looking at campaign ideas that has consumer as the media. The latest one thats caught the fancy of  many people is the 'Internet Explorer 7  tax' employed by Kogan.com. Its a simple idea that been there for the taking for a while. Web designers across the world have been frustrated by having to code for an outdated browser like Internet Explorer 7. But they have to continue as it is still used by around 5% of the world who refuse to notice the Windows Update icon in the system tray. To spread this message and more importantly get noticed, Kogan.com instituted a comical 6.8 percent tax for users of the legacy browser.


“Today at Kogan we’ve implemented the world’s first ‘Internet Explorer 7 Tax’. The new 6.8 percent tax comes into effect today on all products purchased by Kogan.com, by anyone still insistent on using the antique browser,” a notice states on the Kogan.com website. 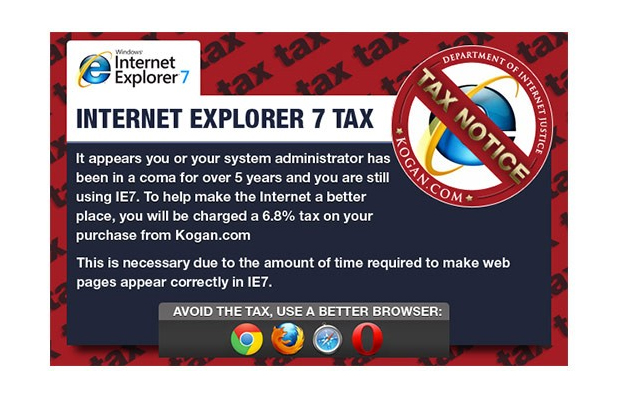 This message has caught the fancy of geeks and web developers around the world and is a trending image on Facebook and other social networks. Kogan.com has now become a known name around the world and established itself as humorous company willing to take a stand. This marketing ploy has not only been covered on social media but also been picked by mainstream media including BBC,The Times of India,Telgraph, Forbes, TechCrunch, etc, giving it further fuel. The current attempt has delivered Kogan.com millions of Dollars worth free advertisment and international recognition.


[More: Whats the shortcut to a great PR event?]

Such ideas are there for the taking for most brands. But they are ignored due to the available marketing largess or because marketers and their agencies dont push themselves harder to find spreadable ideas. Take the current example of 'Desgined for humans' campaign run by Samsung across the world for its flagship Galaxy S3 model. This idea doesnt add anything to the brand but might a have chance of taking a bit away from a great product and its legacy by being mocked at. Designed for humans?#%? There are many things that the people like to spread .. and nearly every brand can weave a story around those to create a lovable and spreadable campaign. To get going they could imbibe one of the following factors (in their campaign) brought out from our online survey as the top 7 reasons for people to spread a message.
Any other factors you would like to add to the list? Note down in the comments.

Lets use these in our campaigns in an increasingly social world where idea is the king and can easily trump over large marketing spends.

[More: How Lava used First mover advantage of Branding to get great PR]