ROM chocolate's award winning campaign is amongst the most innovative campaigns featured in this blog. ROM, a popular chocolate bar from Romania went against its own brand idea of Romanian patriotism to renew its relationship with customers.

ROM, traditionally, had positioned itself as a national chocolate bar. Even the packaging of the bar prominently includes a Romanian flag.

Romania was facing an economic crisis and the political and economic situation of the country was in dolrums. This disrupted what ‘ROM’ stood for…the love for nation which one derived out of the ‘ROM’ bar. People started believing that nothing good can happen in Romania and they were willing to seek opportunities in other countries.

‘ROM’ had to re-energise their love for Romania and hence ROM.

McCann Erickson Romania came out with a “shock and awe” marketing campaign wherein they changed the packaging of ROM from Rmania's flag colors to that of US.

And then... What else. Romanians hated it. It brought amazing PR worth millions. The whole country were up in arms looking for their old package and brand. And the sales zoomed. No wonder this was a major award winner across festivals.

Nestle here shows how Packaging can be a highly relevant opportunity for a brand to attract, surprise & delight it customers.
To further the concept of 'I’m a Chocolover' JWT created a limited edition package where the chocolates are the pieces of the classic board game Peg Solitaire. This was sent to an exclusive mailing list of Cholover fans and partners of the brand reinforcing the fun and premium image of Alpino Chocolates . 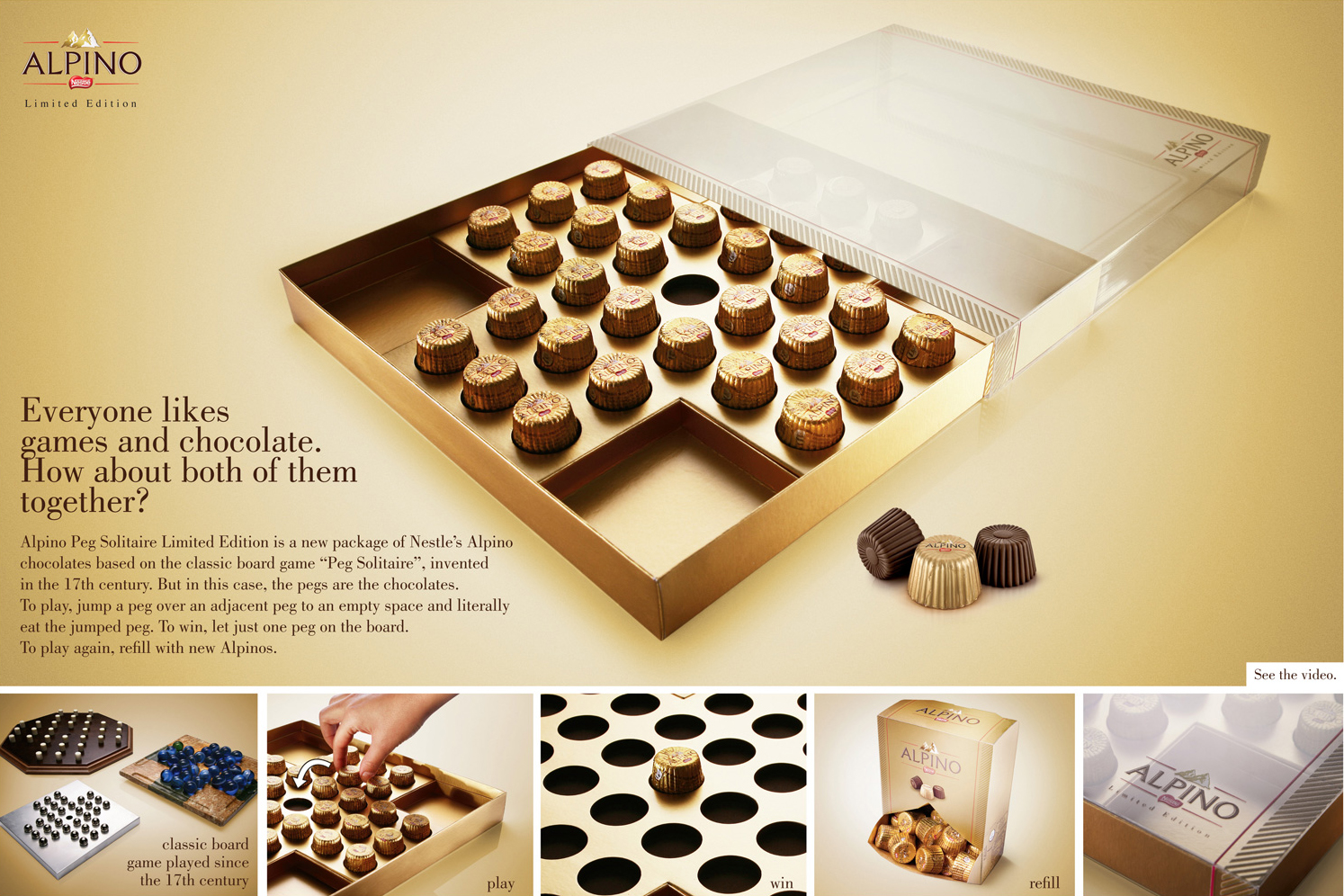 Kellog's recently launched the slogan “It’s Morning Somewhere” across the state by using QR codes and SMS on cereal boxes. “Utilizing the back of the cereal box is a highly engaging static media touch point that allows users an intimate setting to try mobile and turn the static media into a rich media experience,” says Mr. David Apple, chief marketing officer at Augme, Kellog's agency.


The campaign generated over 50,000 QR scans and 6,000 texts to the mobile site, resulting in 38,000 videos played and 50,000 page views. Although the campaign might seem simple, Kellogg’s has demonstrated that it has been able to tap into its consumer via mobile. “It’s surprising that QR code scanning is far exceeding SMS engagements, which is a complete shift in behavior year to year, based on the hundreds of programs Augme has run over the last three years,” Mr. Apple said. The campaign’s effectiveness can be chalked up to a variety of different factors, but the simple use of a QR bar code while consumers leisurely eat breakfast seems like an easy contender for why the company has accumulated so much traffic because it makes sense with consumers’ behaviors. According to Mr. Apple, the goal is to make QR bar codes and SMS a permanent fixture in consumers’ lives via packaging. “The keyword and QR codes will never change, but the content will and eventually become reward-based by delivering offers, coupons and social interactions,” he said.

To participate in the campaign, consumers scan a QR bar code on the back of Crunchy Nut cereal with their mobile devices. Users are then prompted to a mobile site where they watch one of 13 short videos, depending on the time of day with the message “It’s Morning Somewhere.”