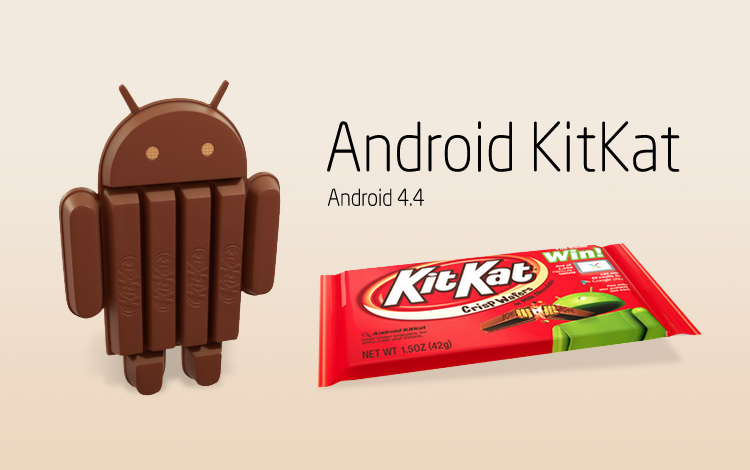 The announcement of the Google's next Andorid version as KitKat spread across the net as wild fire getting over a million views for the offical video below. This is an amazing win - win strategy based on the 'Brand Associate' strategy I have discussed earlier. Though it is told that no money changed hands Google could even charge Nestle for this association as it provides customers the thought to take break with KitKat whenever they open their mobile. Still this strategy will save several marketing dollars for Google and KitKat as each brand promotes the other through its properties and ads. This association can be classified as a Media Space association strategy amongst the three 'Brand associate' strategies. Though eveolved as a way to decrease marketing spends for start-up brands, this association shows how even big brands can benefit and grow through the 'Brand associate' strategies.


According to the current data, the thought to name Android's next release as KitKat happened by accident, it will reap in rich dividends for both the brands. A BBC report today quotes John Lagerling, director of Android global partnerships, saying that "this is not a money-changing-hands kind of deal.” Lagerling said that the previously considered name Key Lime Pie wasnt apt as the e team felt that many people might not know what Key Lime Pie tastes like. “One of the snacks that we keep in our kitchen for late-night coding are KitKats. And someone said: ‘Hey, why don’t we call the release KitKat?’ We didn’t even know which company controlled the name, and we thought that [the choice] would be difficult. But then we thought well why not, and we decided to reach out to the Nestle folks.” Mr Lagerling said he had made a “cold call” to the switchboard of Nestle’s UK advertising agency at the end of November to propose the tie-up. The next day, the Swiss firm invited him to take part in a conference call. Nestle confirmed the deal just 24 hours later. “Very frankly, we decided within an hour to say let’s do it,” Patrice Bula, Nestle’s marketing chief told the BBC. The obvious benefits for Google include massive exposure in convenience stores, the choclate packs and KitKat ads. The KitKat moniker which will appear in Android 4.4 devices will result in constant brand recall for customers across the world. Though this association seems to have happened by accident, it would be worthwhile for brands to consciously use Brand Associate strategy to grow faster while spending lesser.

KitKat has made integrated this Android update well in its current campaign. Thes latest in the series of engaging with the audience is this contest where they are giving away free Nexus tablets with Android's KitKit version.


Talk about seizing an opportunity to crack a viral message and Nokia seems to have got it right this time with this pic posted on Twitter. 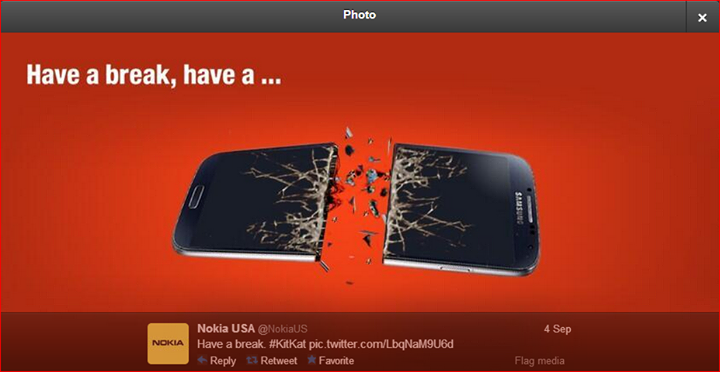